DENVER — Choice Market is targeting electric vehicle (EV) consumers and giving a nod to the future of mobility through the digital signage of its convenience store in the Denver neighborhood of City Park.

The retail site, located at 2200 East Colfax Ave., lists the price of electricity right below the price of gas so EV consumers know what they'll pay, reported The Drive.

Citing reports from PlugShare, charging prices normally hover at around 15 cents per kilowatt-hour. It's highly competitive for the area, with others nearby charging significantly more.

"It's a pretty good rate, honestly, for charging up at 15 cents," Choice Market Chief Operating Officer Ben Kipfer told the news outlet. "It's something different and we want to get people inside the four walls, obviously, as well."

According to Kipfer, typical users stop to charge for 30 to 50 minutes. It's then the aim of the convenience store to welcome those customers inside for a cup of coffee and a bite to eat.

"People walk in here, they always say, 'This is the nicest gas station I've ever been in,'" he said. "That grab and go case ... all again, it's organic, non-GMO, and local. I think people love it."

Kipfer notes that charging fees "probably should be a little bit higher," but the charging isn't a loss for the retailer. Instead it is "a profit center."

In addition to gas pumps, the Colfax Avenue Choice Market features two high-speed 50 kW DC chargers. Each is fitted with a standard CCS connector as well as a CHAdeMO plug for charging Nissan Leafs and similar models. The station also uses a Nissan Leaf as a delivery vehicle. 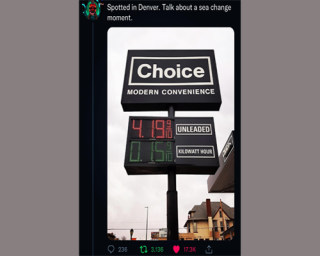 Choice Market highlighted its digital signage that listed the price of gas and electricity in a Facebook post on Earth Day.

Choice Market highlighted its digital signage that listed the price of gas and electricity in a Facebook post on Earth Day. The post read, "Happy Earth Day! This past week a simple tweet of our sign on #colfaxave was shared around the world. @thechoicemarket is happy to see folks taking notice of the shifting #mobility landscape and the very real financial incentives with transitioning to an #electricvehicle. Sea change indeed. #chargingforward"

In its latest venture, Choice Market is partnering with Health Hospitality Partners, headquartered in St. Louis, to develop a new format, Choice Mini-Mart. The model was slated to launch at the University of Colorado Anschutz Medical Campus during the second quarter of 2022, as Convenience Store News previously reported.

The format — which was specifically designed for non-traditional retail spaces such as hospitals, airports and campuses — will feature Choice: NOW, a technology that uses artificial intelligence and cameras to checkout customers without the need for a cashier, prepared food and natural groceries, as well as everyday necessities.