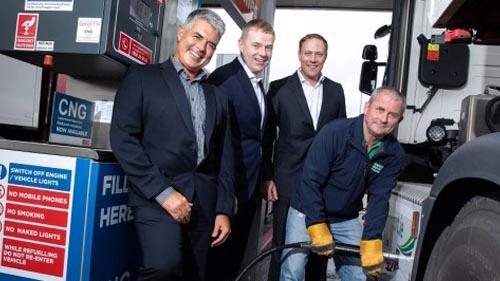 The CNG station is at Circle K's Dublin Port location. It has the capacity to fill 50 heavy goods vehicles a day and each fill takes no more than five minutes.

"At Circle K, we are committed to making our customers lives a little easier every day and together with Gas Networks Ireland we have plans to open additional CNG stations at key motorway locations in the near future," he added.

The fueling facility at Circle K Dublin Port is strategic public infrastructure that will be capable of providing a fully carbon-neutral fuel to the commercial transport market for the first time, it added.

In all, a network of 150 public CNG stations are slated for Ireland in the coming years.

"The opening of the station today is a major milestone in the development of clean transport in Ireland. The development of this groundbreaking network of CNG stations will, for the first time, allow Ireland's commercial fleet to choose a cleaner fuel alternative," said Denis O'Sullivan, managing director, Gas Networks Ireland.

"This first station has allowed us to establish the criteria, in design, safety and permitting, for future stations. Initially utilizing natural gas, these stations are fully compatible with renewable gas," O'Sullivan added. "Working with partners like Circle K, private hauliers and public transport companies, work is well underway to deliver a comprehensive national network of stations."

Circle K is a wholly owned subsidiary of Canada-based Alimentation Couche-Tard Inc. The retailer entered Ireland with the 2016 acquisition of Topaz Energy Group Ltd. of Ireland

Gas Networks Ireland is the business division of Ervia that owns, builds and maintains the natural gas network in Ireland and connects all customers to the gas network.