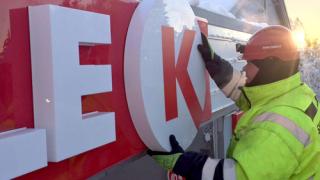 LAVAL, Quebec — More than three years after launching its new global Circle K brand, Alimentation Couche-Tard Inc. has brought the new banner to more than 6,800 convenience stores around the world.

In North America alone, more than 4,900 locations now carry the new brand and in Europe, the number of newly rebranded sites top 1,900, according to Couche-Tard President and CEO Brian Hannasch.

"In Ireland, our last remaining market in Europe, we rebranded nearly 300 locations and are progressing nicely on the plan to have 360 completed by the end of this fiscal year," Hannasch said during the company's third-quarter fiscal year 2019 earnings call.

"Texas is moving forward to meeting its goal of 400, so we are making some great progress inside that CST network," Hannasch noted.

The chief executive also reported that the trends in these newly rebranded stores are strong and lifting results across the company's divisions.

"The key learning is: I should have done it a decade ago. There are just a lot of wins in this space," Hannasch said. "I will start with culture. That's what I have always said was our secret sauce. Having one brand gives us a platform to communicate across 135,000 employees what we stand for, what we want to become and the journey we are on."

Looking specifically at the c-stores the company acquired from CST Brands Inc., Couche-Tard "saw positive momentum in the regions where the former CST locations have been rebranded and that certainly shows the strength of the Circle K brand and the Couche-Tard programs and operations and their ability to drive sales and traffic," he explained.

Couche-Tard is also rolling out a newly designed Circle K layout to nearly 50 locations in Europe this fiscal year. Its target is to have more than 90 open by the end of the year.

"These are newly remodeled stores and are a big step up in terms of the look and feel of the offers. They feature wide aisles, inviting décor, attractive lighting and provide new customer experiences to grow traffic and basket size," Hannasch said.

"In many of these locations, we also have our food-to-go offer. Our prepared on-site sandwiches are particularly popular with the customers," he added.

As part of its global rebranding initiative, the retailer introduced Top Tier Circle K fuel in April 2018, beginning in Florida, as Convenience Store News previously reported. The number of Circle K Fuel locations has grown from the first 20 to now nearly an additional 250 locations across North America as of the third quarter.

The expansion, according to Hannasch, is part of the company's journey "to provide an easier customer experience both at the fuel forecourt and inside our stores."

In the third quarter, the company brought the Circle K Fuel brand to its Heartland Business Unit at more than 120 new sites in Missouri and Illinois. In Europe, the conversion is "basically completed" at Couche-Tard's former Statoil Fuel & Retail ASA sites, all the former Topaz locations in Ireland, as well its former Shell locations in Europe.

By the end of fiscal 2019, approximately 1,000 sites in the Midwest, Rocky Mountain, Southwest, Gulf Coast and Ontario Business Units will get the fuel brand, according to Hannasch, adding that the company is more than halfway toward that goal.

"Unifying the Circle K brand inside our stores and on our fuel islands is improving the customer experience and making our customers' lives just a little bit easier every day," the CEO remarked.

Alimentation Couche-Tard is based in Laval. As of Feb. 3, its network comprised 9,933 convenience stores throughout North America, including 8,662 stores with fuel. Its North American network consists of 19 business units, including 15 in the United States covering 48 states and four in Canada covering all 10 provinces. In addition, through CrossAmerica Partners LP, Couche-Tard supplies road transportation fuel under various brands to approximately 1,300 locations in the United States.

In Europe, Couche-Tard operates a broad retail network across Scandinavia, Ireland, Poland, the Baltics and Russia through 10 business units. As of Feb. 3, its European network comprised 2,709 stores, the majority of which offer fuel and convenience products, while the others are unmanned automated fuel stations that only offer road transportation fuel.

In addition, under licensing agreements, more than 2,100 stores are operated under the Circle K banner in 14 other countries.