In honor of Texas Arbor Day on Friday, Nov. 2, ALON partnered with local non-profits throughout Texas during the months of October and November to plant trees and engage in several sustainability projects. An ALON spokesperson was available at each event.

"Since Strive launched in 2015, ALON 7-Eleven has been able to plant more than 34,000 trees in partnership with the Arbor Day Foundation," said Russ Pfeiffer, ‎vice president, fuel strategies and financial services - ‎Delek US Holdings Inc. "We are pleased to partner with Texas drivers and nonprofit organizations throughout the state to continue to make a positive impact on the environment."

Headquartered in Dallas, ALON Brands markets ALON motor fuel products at more than 800 locations and is the largest 7-Eleven licensee in North America.

Alto-Shaam announced that it has raised $775,000 over the past decade for the Leukemia & Lymphoma Society's Wisconsin Chapter through its Jerry Maahs Memorial Golf Outing and matching donations. 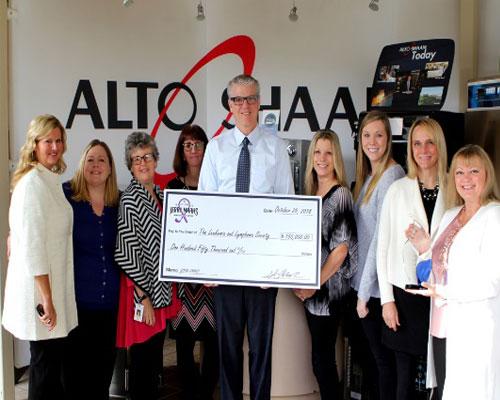 When Alto-Shaam's founder, Jerry Maahs, passed away from non-Hodgkin's lymphoma in 2006, the company began planning a way to honor his memory. For the past decade, the Jerry Maahs Memorial Golf Outing has been an outlet to celebrate Jerry's life while raising money for the Leukemia & Lymphoma Society's Wisconsin Chapter. Through a research grant, the event has raised critical funds to support cancer research and advance treatments for the disease, the company stated.

"We are proud of the success of this event and the good it has accomplished," said Steve Maahs, son of Jerry and Alto-Shaam President and Chief Operating Officer. "We hope our contribution over the years has helped take the burden of this diagnosis off others. We've always felt it was a fitting way to honor Jerry and we thank the many participants and volunteers who have contributed to this event’s success over the years."

In the aftermath of Hurricane Florence, GPM Investments LLC partnered with Samaritan's Purse to give back and support those in need to raise $65,729 in disaster relief aid. 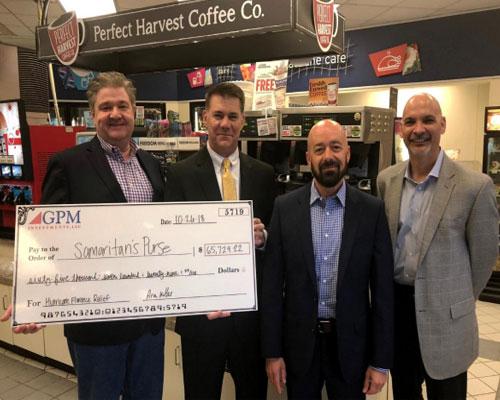 "GPM felt an innate duty to get involved and give back to the communities so greatly affected by Hurricane Florence," said GPM Investments President and CEO Arie Kotler. "We are truly thankful for our incredibly generous customers and store employees for their donations and time which allows us to directly impact the lives of individuals in our community. Our thoughts and prayers continue to go out to those touched by the devastation, including many of our store teams and their families, as we all pick up the pieces and rebuild."

To read more about what other c-store retailers and suppliers have done for Hurricane Florence disaster relief efforts, click here.

From mid-November through Dec. 25, Jacksons Food Stores launched the Gift of Peace, a campaign to help end domestic violence in six Western states.

Throughout the campaign, peace doves were available in $1, $5 and $10 increments, and were hung in the Jacksons' Idaho c-store locations.

The company will provide matching funds to leverage customer donations to the Idaho Coalition Against Domestic and Sexual Violence, a 501c3 nonprofit, as well as similar organizations in five other states.

Last year, the campaign raised more than $160,000 across all six states, and this year, the company hopes to raise even more, according to Jacksons Food Stores.

The Gift of Peace campaign is currently underway at Jacksons Food Stores in Idaho, Utah, Nevada, Arizona, Oregon and Washington. 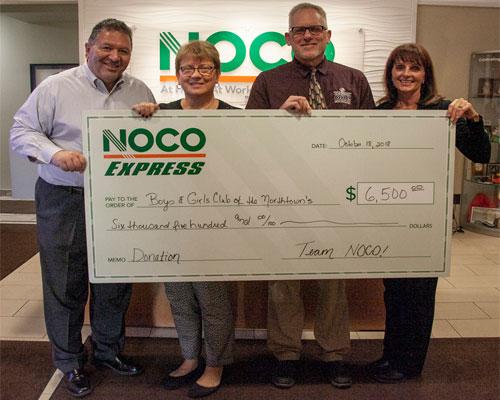 The convenience store retailer also raised $14,309 as part of a recent in-store campaign for the Leukemia & Lymphoma Society's Western & Central New York Chapter. NOCO Express customers had the opportunity to make a $1 donation at any of the company’s 39 locations throughout September.

"Thank you to both our customers and our employees who have raised more than $100,000 over the past six years to support ongoing research and services for those who are fighting blood cancers here in Western New York," said Michael Bradley, chief financial officer and senior vice president for NOCO.

NOCO is headquartered in Tonawanda, N.Y. It offers a full line of products and services, including natural gas, electricity, propane, heating oil, HVAC sales and service, and commercial fuels. It operates 39 NOCO Express c-stores throughout the region.

The Wills Group partnered with Rebuilding Together, a national nonprofit organization whose mission is to repair the homes of people in need and revitalize communities, to improve several homes in Severn, Md., a community of Anne Arundel County.

Employees were joined by more than 100 Navy volunteers and local residents as part of the joint service "Make a Difference Day," a national day of volunteering celebrated annually to promote community service. Volunteers worked together to address repairs throughout Anne Arundel County, which included replacing doors, installing park benches and repairing buckling stairs in several homes.

The neighborhood improvement day is part of The Wills Group's national partnership with Rebuilding Together announced earlier this year. The Wills Group donated $100,000 to Rebuilding Together and committed to supporting a series of employee volunteer events to further their community engagement efforts to ensure safe and healthy homes and communities across the state of Maryland.

"At The Wills Group, we know how important it is for a family to be able to count on a home that is safe and comfortable," said Lock Wills, chairman, president and CEO of The Wills Group. "Our partnership with Rebuilding Together helps The Wills Group expand this commitment, and I’m thrilled to see our Wills Group team take the time to roll up their sleeves and help these deserving families and communities."

TravelCenters of America LLC, operator of the TA and Petro Stopping Centers travel center brands, concluded its annual campaign for the St. Christopher Truckers Development and Relief Fund (SCF) for 2018. The customer and employee support received during the annual "Band Together for SCF" campaign, along with raffles and other events held throughout the year, resulted in donations in the amount of $244,849.80. 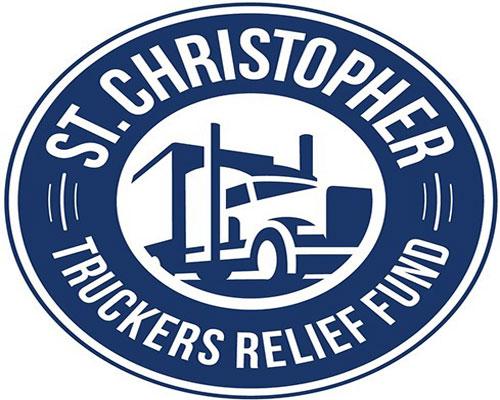 The Band Together campaign ran from Aug. 15 through Sept. 30 at TA and Petro Stopping Centers nationwide and invited customers and employees to support the cause for helping drivers in need. The campaign provided wristbands, window clings and keychains for donors to show their support in exchange for contributions of $1 and $5.

The travel center operator has been supporting drivers through the SCF since 2010. The TA and Petro annual campaign mark the largest single contribution the fund receives each year.

"We are always honored to have the opportunity to help drivers in need. We know full well it’s the patronage of our customers and employees, year over year, that assist these efforts. We couldn’t be more proud and thankful to them for their ongoing support," said Barry Richards, president and chief operating officer of TravelCenters.

Rapid Refill Convenience Stores, part of Volta Oil, teamed up with the Alzheimer's Association's Massachusetts/New Hampshire Chapter for the eighth year, raising $152,464 at 15 store locations for their annual Purple Pump Up for Alzheimer's campaign.

The six-week campaign included customer donations at the point of sale, vendor support and donating 5 cents of every gallon of gas sold on June 21 in recognition of "The Longest Day" fundraising event. Volta Oil also matched donations made during this time.

"Our associates do an amazing job not only raising funds during the Purple Pump Up campaign, but also getting the message out about a world without Alzheimer's," commented Jim Garret, chairman of Volta Oil a past board member for the Alzheimer's Association's Massachusetts/New Hampshire Chapter. "I am truly thankful for all of the effort our personnel have put into the Purple Pump Up event."

In support of its steadfast commitment to the U.S. military and first responders, and in concert with the annual celebration of Veterans Day on Nov. 11, Yesway joined forces with Operation Homefront to recognize military service members with a $50,000 check presentation at the c-store chain’s Grimes, Iowa, location on Nov. 6. Local community members and their families were also be recognized for their military service during the ceremony.

As the foundation of the Yesway Gives Back charitable giving program, Yesway is supporting, honoring, and meeting the needs of current and former members of the U.S. military and their families, who have sacrificed so much while fighting tirelessly for our nation’s freedom. In partnering with Operation Homefront, a national nonprofit that serves America’s military families, Yesway celebrates these heroic women and men, and thanks America’s troops for their service, according to the convenience retailer.

"At Yesway, we feel it is important to make meaningful contributions to the communities we serve," said Thomas N. Trkla, chairman and CEO, Yesway. "Not only are we donating $50,000 in support of all that Operation Homefront does for the brave Americans serving in our armed forces, but we invite Yesway customers to join us in supporting America’s military and their families who serve on the homefront as well.

"To that end, not only do we offer free coffee or fountain beverages to active and retired members of the military and first responders on Fridays in our stores, we are also donating 5 cents from the sale of every bottle of Yesway-branded spring and purified water sold, up to an additional $25,000, to this wonderful organization,” he added. 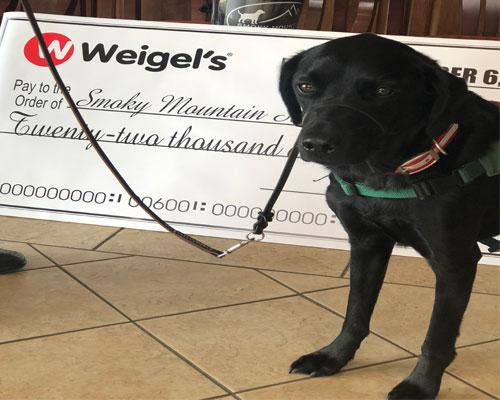 The three-week fundraising event supported Smoky Mountain Service Dogs, a local non-profit organization whose mission is to enhance the physical and psychological quality of life for veterans with service related disabilities through the training and placement of highly-trained service dogs.

The program provides, at no charge to veterans in need, specially trained service dogs to aid in assistance and companionship. Dogs are trained for many Veteran-related disabilities such as providing navigation and assisting in mobility. The cost to raise and train just one service dog is approximately $22,000 before they can be matched to a veteran.

"It is has been our goal to raise the funds to train one service dog, and be able to have more service dogs available for our local veterans thru this program based in Lenoir City, Tenn.," said Bill Weigel, chairman of Weigel's. "We are excited that our customers and employees have made it possible to raise and train one service dog, and honored to be able to aid the men and women who have served our country with a fundraising event whose mission is to bring them a better quality of life. It’s a small step for us in a much larger picture to help those that have so unselfishly sacrificed for all of us."

Weigel's operates 66 convenience stores, a dairy and a bakery within a 100-mile radius of its corporate headquarters in Powell, Tenn.