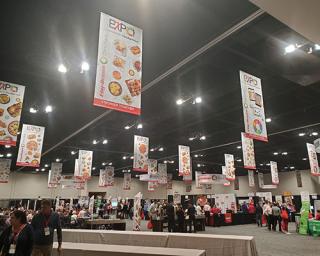 SCHAUMBURG, Ill. — Less than a year since Performance Food Group (PFG), parent company of Eby-Brown Co. LLC, closed on its acquisition of Core-Mark Holding Co. Inc., the two convenience channel distributors have already made significant progress in how they offer the best of both their worlds.

"They were the first ones to see the change," he told Convenience Store News during Eby-Expo Midwest, the second of the distributor's annual dual trade shows, held April 13-14 at the Renaissance Schaumburg Convention Center Hotel.

The companies are now in the second-stage process of bringing various teams and departments together and integrating various systems and operations to build a single team.

Stage three will be integrating the best of both Eby-Brown and Core-Mark into each other's networks, which will also begin this year.

The companies' areas of expertise complement one another, according to O'Rourke. "Core-Mark was very fresh focused. Eby was very foodservice focused," he said.

After PFG acquired Eby-Brown in 2019, the Naperville, Ill.-based distributor was able to develop specific convenience store plug-and-play programs that use PFG's own private label ingredients and draw on the parent company's leverage and scale in the foodservice channel, bringing those advantages to convenience.

One advantage in integrating Core-Mark and its fresh offerings is that the Westlake, Texas-based distributor doesn't have to start from scratch; it has "a huge head start" on programs that Core-Mark can take advantage of now as part of PFG, O'Rourke noted.

Earlier in the COVID-19 pandemic, PFG's focus was on adapting to the new foodservice environment. Today, it is focused on recapturing the baseline of convenience foodservice and then evolving it to the next level of the category, something many retailer partners are achieving through visits to the company's 14,000-square-foot Center of Excellence, which earned Core-Mark and Eby-Brown a special Leadership Award for Comprehensive Multi-Category Management in CSNews' 2022 Category Captains awards program.

The goal is to present where c-stores are today and discuss how the company can take them into the future. "Food is the focus for many of our customers," O'Rourke said.

Technology and loyalty are also a priority for PFG. The company partnered with PDI to develop a new loyalty program with an app specifically designed with the store in mind — something that should be especially valuable to the industry's small operators.

Rewards are funded and rebated through vendors, taking the negotiation process off retailers' to-do list. The stores themselves only need to fund cents-off-per-gallon rewards. The program also offers the opportunity to launch club programs, such as buy five coffees, get one free.

Larger retailers with more than 20 locations can use a different version of the Top Off Rewards program with their own branding and significantly more customization.

Overall, the program is designed to increase loyalty to individual locations and was crafted with store operators in mind, according to PFG.