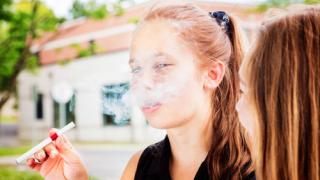 SILVER SPRING, Md. — A recent report by the Food and Drug Administration (FDA) found that nearly 10 percent of underage consumers are using electronic cigarettes, sparking the agency to call it a "serious public health problem."

The agency's the 2022 National Youth Tobacco Survey (NYTS) on e-cigarette use among U.S. youth found that 2.5 million, or 9.4 percent, of middle and high school students reporting current e-cigarette use. The findings are part of federal data the FDA collected in coordination with the Centers for Disease Control and Prevention.

"The FDA remains deeply concerned about e-cigarette use among our nation's youth. It's clear that we still have a serious public health problem that threatens the years of progress we have made combatting youth tobacco product use," said FDA Commissioner Robert M. Califf. "We cannot and will not let our guard down on this issue. The FDA remains steadfast in its commitment to using the full range of our authorities to address youth e-cigarette use head-on."

The study, which was conducted January-May 2022 using an online survey, shows that overall about one in 10 U.S. middle school (3.3 percent) and high school (14.1 percent) students reported current e-cigarette use. Current use is defined as in the past 30 days, the agency noted.

Among these youth e-cigarette users, nearly 85 percent reported using flavored e-cigarettes, and more than one in four (27.6 percent) reported daily use of an e-cigarette.

Among current youth e-cigarette users, the most commonly used device type was disposables. The top three brands that current youth e-cigarette users reported "usually" using were Puff Bar (14.5 percent), Vuse (12.5 percent) and Hyde (5.5 percent). While Puff Bar and Vuse were pre-specified response options on the survey, Hyde was not. Students wrote in Hyde as their preferred brand, and because of this, the reported percentage of use is likely an underestimate, the agency said.

With the release of the NYTS on Oct. 6, the FDA took additional steps to address brands popular among youth.

The agency issued a warning letter to EVO Brands LLC and PVG2 LLC, doing business as Puff Bar, for receiving and delivering e-cigarettes in the United States without a marketing authorization order.

The FDA requested a response from the companies within 15 working days of receiving the letter detailing how they intend to address the agency's concerns, including the dates on which they discontinued the sale and/or distribution of these tobacco products, and plans for maintaining compliance with the Federal Food, Drug & Cosmetic Act.

The Puff products subject to this warning letter are non-tobacco nicotine (NTN) products. In response to the increase of NTN in popular tobacco products, Congress passed a federal law which went into effect on April 14, 2022, clarifying the FDA's authority to regulate tobacco products containing nicotine from any source, including NTN or synthetic nicotine.

In conducting its scientific review, the FDA determined that the applications lacked sufficient evidence demonstrating that these flavored e-cigarettes would provide a benefit to adult users that would be adequate to outweigh the risks to youth, according to the agency.

As the agency noted, it is illegal for a retailer or distributor to sell or distribute e-cigarettes that the FDA has not authorized, and those who engage in such conduct are at risk of FDA enforcement.

"Congress gave the FDA authority to hold manufacturers and retailers who violate the law accountable," said Brian King, director of the FDA's Center for Tobacco Products. "FDA is actively working to identify violations and to swiftly seek corrective actions, particularly for products popular among youth. We will use all compliance and enforcement tools available to us, as appropriate, to protect our nation's youth."