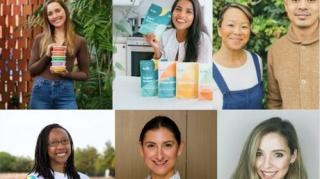 CHICAGO — Foxtrot has named the winners of its second-annual "Up & Comers" awards program, which is designed to celebrate small makers and uncover the best emerging food and beverage brands. The 2022 program focused on achieving gender equality in the food industry.

From more than 1,000 applicants, six unique, female-founded and led brands were selected as this year's winners:

"We were blown away by the quality of applicants this year, from the ingredient innovation and creativity to the missions and stories behind each brand and maker," said Carla Dunham, CMO at Foxtrot. "Given our focus this year on encouraging female founders to submit, we are thrilled to share that all winners are women-led.  We’re honored to not only introduce our customers to these inventive and delicious products but to also join these talented entrepreneurs as they continue to grow and make an impact in the CPG space.”

Foxtrot is committed to donating $200,000 in funding and marketing support to the winners and will feature the winning brands on its store shelves for at least one business quarter.

The "Up & Comers" program Hero Winner is awarded to a female or femme-identifying founder whose product blew the judges over with both taste and brand purpose. Toasty, this year's Hero Winner, will receive $25,000, a spot on Foxtrot shelves for at least a quarter, a one-hour mentorship opportunity with three judges as selected by Foxtrot, and marketing support worth $45,000.

The program's Category Winners will receive $5,000, a spot on Foxtrot shelves, and $20,000 in marketing support.

In 2021, Foxtrot's "Up & Comers" program presented its Hero Winner award to Omsom, a fast-growing Asian pantry staples brand, which has continued to take the consumer packaging goods space by storm since coming. Omsom was founded by two sisters, Vanessa and Kim Pham.

When the "Up & Comers" program initially launched in 2021, only 10 percent of the more than 900 applicants were women, but they accounted for half of the award finalists. This raised the retailer's antennae that it needed to do more to uplift this community, as Convenience Store News reported. Foxtrot committed to increasing the amount of female-founded or led brands on their shelves by 50 percent in the next year,

Foxtrot currently operates in Chicago, Washington, D.C., and Dallas. In April, the company announced its plans to open four new convenience stores within the District of Columbia, Maryland, and Virginia (DMV) region by the end of 2022. This expansion marked its first entry into Maryland, which doubled its footprint in the DMV region.

The convenience store chain not only takes a localized approach to design but also merchandising. In the DMV region, its locations carry more than 175 local products from over 50 local makers.

Foxtrot also plans to open 50 new stores over the next two years in both existing and new markets. The company's mission is to redefine convenience for the modern consumer by marrying the best neighborhood retail and e-commerce technology to create a community of discovery.