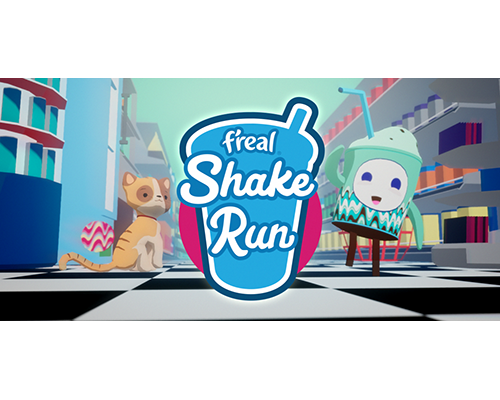 EMERYVILLE, Calif. — F'real, maker of on-the-go, blend-it-yourself frozen beverages, is teaming up with multiple convenience store chains to kick off a reboot of its "Choose Your Alternate F'reality" campaign and launch "f'real Shake Run," a custom-branded mobile game that is activated via an on-screen QR code revealed during the product blend cycle.

The campaign includes TikTok creator activations, a Twitch streaming event and creative that will be leveraged across online, mobile and social platforms, as well as featured in c-stores nationwide.

Stating in April, consumers will unlock exclusive access to "f'real Shake Run" via f'real blender screens nationwide with the purchase of a f'real at c-stores such as Cumberland Farms, Kum & Go and Maverik, among others.

In the game, players guide their milkshake through the aisles of an Alternate F'reality c-store while they collect flavor boosts, dodge obstacles and dash toward the ultimate victory: getting slurped. The game speeds up the longer they play, adding to the challenge.

Players can switch between milkshake characters Vanilla Bliss, Chocolate Chill, Cake Batter and Cool Mint Chip, or stick to one character to gain extra points and beat their high score.

"As we thought about extending our #FrealAF campaign into new territory, gaming simply made sense. Our consumers have embraced gaming as a form of escape and a way to socialize responsibly," said f'real Senior Director of Marketing Hayden Perry. "Tapping into gaming culture and encouraging our consumers to share their Alternate F'reality experience with friends is an effective way to provide them with a moment of respite while generating awareness that a f'real shake or smoothie does exactly that."

To introduce "f'real Shake Run" to the brand's Generation Z audience, popular TikTok creators will challenge followers to beat their high scores. This summer, TikTokers and fans will also be encouraged to use #FrealAF to share their own unique Alternate F'realities — virtual worlds or dimensions inspired by their favorite way to f'real — unleashed when blending up the f'real of their choice.

To generate awareness across paid and owned media channels, "f'real Shake Run" has also been captured as part of a 60-second marquee video that connects the brand, the blend-it-yourself store experience, various frozen beverage product offerings and the Alternate F'reality game world.