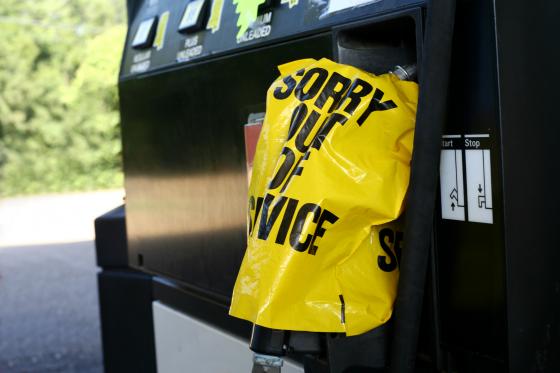 NATIONAL REPORT — Gas stations in the Southeast are facing fuel shortages as drivers panic buy gasoline nearly a week into the shutdown of the Colonial Pipeline due to a cyberattack.

Despite pleas from government leaders and industry experts not to hoard gas, many stations have seen long lines in recent days.

GasBuddy data shows that as of early May 12, nearly a quarter of North Carolina gas stations (24.8 percent) were without gasoline, as well as 15.4 percent of stations in Georgia, 15 percent in Virginia and 13.4 percent in South Carolina. Florida, Maryland and Tennessee also reported outages, according to CNN.

On a local level, the problem is exaggerated in major metro areas, with outages impacting 73 percent of stations in Pensacola, Fla.; 72 percent in Raleigh, N.C.; 71 percent in metro Charlotte, N.C.; and nearly 60 percent in Atlanta.

Gasoline demand also jumped 14 percent on May 11 compared to one week prior.

"Demand has been two to four times normal in many markets and the system, even when it isn't stressed, can't support that," Jeff Lenard, vice president of strategic industry initiatives at NACS.

A shortage of tanker truck drivers is exacerbating the problem. Experts predicted a lack of qualified drivers could result in summer shortages even before the Colonial Pipeline shutdown, as Convenience Store News previously reported.

"This seems to be turning into a not-enough-truck-drivers-to-get-it-there story," Patrick De Haan, head of petroleum analysis at GasBuddy, said on social media.

Savannah, Ga.-based Parker's, which operates 68 stores in coastal Georgia and South Carolina, implemented a cap on fuel purchases to cut down on panic buying.

"Due to the shutdown of the Colonial Pipeline, we are implementing a temporary $50 limit per customer for all fuel purchases," the company posted to its Facebook page. "The Parker's fuel team is working diligently to keep our tanks filled in the wake of this unexpected situation. While we understand that this is an inconvenience, know that we are doing everything we can to source fuel and keep gas readily available for our customers."

Mississippi Gov. Tate Reeves urged state residents to remain calm, as the state only receives about 30 percent of its fuel supply from the Colonial Pipeline, reported WMC5.

"If everyone buys their normal amount of fuel, they're normal amount of gasoline for this particular week, then there will not be a major shortage in Mississippi," Reeves said. "We should have adequate supplies."

DenSantis cited a "significant and immediate threat to the continued delivery of such fuel products to the State of Florida" in his executive order and authorized activation of the Florida National Guard as needed.

Florida's gasoline supply is not significantly affected by the pipeline shutdown, but panic buying has led to local shortages, particularly in north Florida, reported MSN.

In Virginia, the state of emergency gives state agencies the ability to issue waivers on size and weight restrictions for vehicles transporting petroleum products and allows local governments to help fund the recovery process.

"Today's emergency declaration helps Virginia prevent and respond to gas shortages across the Commonwealth," Northam said. "With this increased flexibility and funding, we can respond to this evolving situation and ensure access to fuel for Virginia motorists."

NACS is currently working with the Biden Administration to address the major supply disruption. On May 11, the U.S. Environmental Protection Agency (EPA) issued a reformulated gas (RFG) l waiver for the Mid-Atlantic, which will allow conventional fuel to be sold in RFG areas in Maryland, Pennsylvania, Virginia and Washington, D.C., to facilitate the supply of gasoline, NACS reported.

The association is also working with the EPA to grant a waiver to allow fuel marketers that still have access to winter blends of fuel to be sold beyond the deadline to transition to summer blends. This could also extend the supply of fuel by making it possible to blend butane into summer blends, NACS said.

U.S. Department of Transportation (DOT) announced additional help for states affected by the pipeline shutdown. The White House and DOT determined that previous declarations of "major disaster" issued by the president within the past 120 days allow states covered by those declarations to use Interstate highways to transport overweight loads of fuel, reported Fleet News Daily.

Each state must continue to follow its own procedures for the issuance of special permits authorizing the loads. However, the added flexibility permits such transportation trucks to operate on the Interstate Highway System and other federal highways.

The Colonial Pipeline set a goal of "substantial" restoring service by the end of the week. It will take several days to ramp up operations after a full restart.

"The American people can feel assured that this administration is working with the company to get it resumed as soon as possible," said U.S. Secretary of Energy Jennifer Granholm.