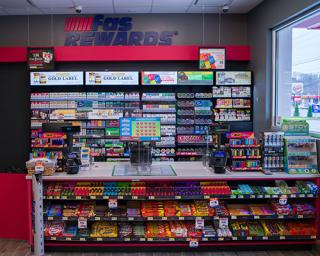 RICHMOND, Va. — GPM Investments LLC and parent company Arko Corp. have reason to be pleased with its performance in 2021. Along with the positive financial results it reported for its first full year as a public company, Arko launched multiple initiatives that it expects to pay off in 2022 and beyond, according to President and CEO Arie Kotler.

A big part of the company's agenda involves fulfilling the food and grocery needs of its customer base through investments in frozen food and grab-and-go offerings.

This is particularly relevant at a time when pandemic-related supply chain problems have resulted in product outages at supermarkets. Assuring consumers that they can still find their favorite pizza or other frozen item amid these disruptions builds trust.

"It's psychological. Someone still made those sandwiches, but you don't know about it; you didn't see it. That's the reason the GNG grew up so fast and delivery grew so fast," he said.

GPM currently has 525 convenience stores with grab-and-go food and 690 stores with frozen food. The retailer is also aggressively moving forward in its strategic partnership with Sbarro, the Original New York Pizza. In late December, the chain announced plans to open two Sbarro restaurants inside Village Pantry stores in Indiana as part of a pilot test, followed by two more early this year.

Based on preliminary results that include very promising early sales and margin growth, GPM plans to add approximately 50 in-store Sbarro restaurants by the end of 2022.

In addition to these food offerings, the retailer is rolling out a bean-to-cup coffee program with the installation of two units each at more than 500 stores. This move was also prompted by a change in consumer habits. With the stark increase in people working from home, more coffee drinkers are making purchases outside of the traditional morning rush. However, it is difficult to accommodate customers who want fresh coffee at other times of the day using traditional coffee urns. Bean-to-cup machines ensure each cup is fresh.

"We said if this is going to be the way it's going to be, let's put in machines and we will be 24/7 in the coffee business," Kotler explained. "It's fresh; no waste."

The company specifically chose machines that require minimal input from customers, such as size and if they want room for cream, to offer a speedy, simple experience. According to company leaders, extensive customization options aren't necessary for the new coffee program to be a step up in quality vs. its existing program.

"The minute you grind those beans and make the coffee on the spot, there's no question the coffee is better," Kotler said.

The Importance of Employees

Grab-and-go food, the Sbarro partnership and bean-to-cup coffee all help minimize the labor requirements for store employees. GPM's smaller store footprint also means a location can operate with fewer workers on the same shift, though the company has still felt the effects of the industrywide labor crunch.

It's offered sign-on and retention bonuses, and added recruiters to the hiring process, which allows store managers to concentrate on their store and their customers.

Finding the right employees is important not only for basic operations, but also to promote the company's fas REWARDS loyalty program, which underwent a revamp in November 2021 and will get a new mobile app later this year.

"It really is grassroots marketing," said Mike Bloom, executive vice president of marketing and merchandising for GPM. "To get these people to enroll and give you their email address, you have to talk to them."

He noted that it is very common for customers to accumulate the use-them-your-way fas BUCKS without knowing it, so engaged employees who can alert the customer to their rewards play a big part in marketing the program.

"At the end of the day, it really is about that store associate talking to the customer," he said.

The impending fas REWARDS app redesign will build on the program's recent relaunch, which set its earn-back rewards level higher than the industry average, according to Bloom. The new app, which is currently expected to release around August, will include an updated visual design and "tremendous" benefits, as well as enhanced customer profiles that will help GPM tailor offers to the individual.

"Since we know, we can offer you special deals to get you to keep coming back to our store," Bloom said, pointing out that the No. 1 redemption currently is the program's "Happy Birthday" note and reward. "That's the name of the game: to create the loyalty and develop that relationship with you. It's really about an emotional connection."

Focusing on Quality vs. Quantity

Looking ahead to the rest of 2022, GPM expects to launch and learn from electric vehicle (EV) charging sites at two Colorado stores. Kotler admits to being skeptical of EVs at first, but the company now plans to go after available grants. He sees the buildout of EV infrastructure to be a net positive for the convenience store business even if it could eventually cut into fuel sales.

"When you plug your car in, you're going to need to spend 20, 25 minutes on an EV charger station. I think there's a very good chance you'll end up in the store," he said, noting that EV drivers can step away from their cars, unlike drivers who have to stay with their vehicles while filling the gas tank and may not feel a need to go inside afterward. "That's the way I feel it's going to be. At the end of the day, people who travel will actually stop in convenience stores, and I think the convenience store business will increase tremendously just because of that."

"We don't look on quantity, we look on quality," he said, pointing out that the acquisitions GPM makes consist of brands with very strong brand equity.

While GPM was No. 5 on the 2021 Convenience Store News Top 100ranking of the largest c-store chains, store count growth on its own is not a goal of Kotler's.

"We have no ego. To add another 500 stores would be great, but that's not our goal," he said. "Our goal is to increase profitability for our shareholders. You don't take the number of stores to the bank."

Based in Richmond, GPM is a wholly-owned subsidiary of ARKO Corp. The retailer has approximately 3,100 locations comprised of approximately 1,415 company-operated stores and 1,675 dealer sites to which it supplies fuel.