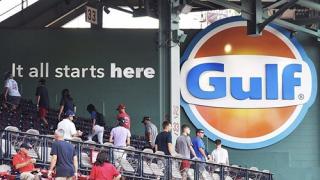 WELLESLEY HILLS, Mass. — Gulf Oil has signed a multi-year extension of its existing partnership with the Boston Red Sox. This marks the 15th season that the baseball team and the Gulf brand, which has a major presence in New England, will work together in new ways to deliver fans the best experience both in and out of the park.

As part of the extension, the well-known Gulf sign over left field at Fenway Park will remain in place. Gulf also plans to begin offering Red Sox fans exclusive offers on fueling their way to games through the MLB Ballpark App's Ballpark Bingo game.

The Ballpark Bingo game, presented by Gulf Pay, can be played by fans inside park or from the comfort of their own homes, providing them with the ability to engage from anywhere on game day. Each Red Sox game will provide Ballpark Bingo players in the park with new prizes such as Gulf gift cards, tickets to a future game at Fenway Park and fuel offers.

"As we mark our 15th year of partnership with Gulf, we are pleased to announce an extension of our longstanding affiliation with this nationally recognized brand headquartered here in Massachusetts," said Red Sox Executive Vice President Troup Parkinson. "Their commitment to our Club extends beyond the walls of Fenway Park with their support of the Red Sox Foundation's RBI program, which provides free access to baseball and softball to youth in our city. We look forward to further strengthening our relationship through this renewal and expanding the impact we have throughout the community."

Gulf will also continue to support the Red Sox Foundation's RBI — Reviving Baseball and Softball in Inner-Cities — Program through the extended partnership in 2022. Throughout the previous season, Gulf supported the RBI Program through its "Fuel the Win" promotion with donations for every base stolen by the Red Sox at Fenway Park. It also collaborated with RBI for coaches' diversity training sessions and presented tickets to Fenway Park for local softball teams as part of its support.

"Gulf and the Red Sox both have rich history within the Boston area, and we are excited to continue our partnership and further support our local communities through newer initiatives like the Red Sox Foundation," said Gulf Chief Marketing Officer Sue Hayden. "From new destinations to tried and true favorites like Fenway Park, consumers can rely on Gulf to fuel their next great adventure."

The Red Sox partnership is the latest collaboration between sports teams and c-store industry retailers and suppliers. Other recent examples include Big League Chew serving as the Official Gum of the USA Softball Hall of Fame Complex; Old Trapper Smoked Products serving as the official beef jerky of the Big Ten Conference, including football, men's and women's basketball, and hockey seasons; and Hunt Brothers Pizza partnering with Flowcode and Stewart-Haas Racing to create the world's largest and sports' fastest QR code on a racecar, specifically the No. 4 Hunt Brothers Pizza Ford Mustang.