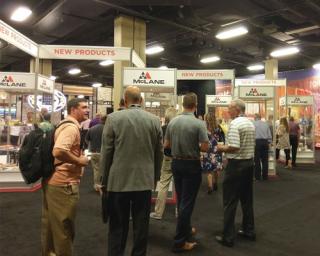 NASHVILLE, Tenn. — During this year of investment in the products and services it offers its retail partners, convenience distributor McLane Co. Inc. invited convenience store operators to "Top the Charts" and live the theme of the 2017 McLane National Trade Show, held this week in Nashville, also known as Music City.

Following up last year's debut of its newly renamed private label line CVP (Consumer Value Products), which was its biggest launch to date, McLane showed off expanded CVP offerings on the trade show floor this week.

With eating occasions blurring together more than ever before, the company is crossing over snacks and confectionery in a new CVP brand called Divinely Sweet. This "snack-fection" line of on-the-go indulgence items launches with four decadent, single-serve items: Milk Chocolate Peanut Butter Cups, Sea Salt Caramel, Chocolate Grahams, and Toasted S'Mores Chocolate Grahams. More varieties will become available in the future, according to McLane's Teresa Voelter, general manager of CVP.

In tandem, McLane announced a permanent partnership between itself and the Children's Miracle Network (CMN) Hospitals at the show. One cent from each CVP Health unit and case of YumBees candy sold will go to the nonprofit organization. The CMN logo now appears on the items' packaging.

Retailers who stopped by the CVP booth also had the opportunity to weigh in on the future of Work Fare Professional, the other new CVP brand that debuted at the show. This line includes back-of-house supplies such as cleaning chemicals, foodservice gloves, and carryout bags. The on-site survey measured retailers' preferred delivery system for chemical cleaners: dissolvable tablets, squeezable bottles or tear-open pouches.

Previously known as Salado Sales, CVP celebrates its 25th anniversary this year. More new products are expected to launch before next year's trade show, but the distributor has been focusing on upgrading many of CVP's existing offerings first, Voelter said.

Meanwhile, at the McLane Kitchen booth, the company once again demonstrated the capabilities of how it can enhance convenience stores' foodservice programs by cooking items onsite in the functioning kitchen. Recipes were created using products from suppliers available through McLane Kitchen.

Retailers looking to expand or improve their coffee and hot beverage programs at any level found numerous options to explore at the show. McLane is partnering with Kerry Convenience to design a quarterly limited-time offer (LTO) hot dispensed calendar for 2018, capitalizing on consumers' increased desire for flavor variety and seasonal offerings. In the first quarter of the year, the LTO will be Mint Fudge Cocoa; Q2 is Smoked Butterscotch Cappuccino; Q3 is Raspberry Crème Brulee Cappuccino; and Q4 is Cinnamon Hazelnut Cappuccino.

The Kerry booth had a three-carafe testing area where visitors could try three kinds of coffee at budget, mid-tier and premium levels. While it's possible to have a successful hot dispensed beverage program at any of the levels, the area was designed to demonstrate the differences between them through in-person experience.

Additionally, retailers interested in getting in on the cold brew coffee trend could visit Java City, which displayed two different nitro cold brew units, both of which use nitrogen rather than carbon dioxide. The larger unit, generally suited for full-service restaurants, uses "kegs" of nitrogen, while the more compact countertop model reduces the amount of labor involved, making it a good fit for most c-stores.

McLane is one of the largest supply chain service providers in the United States, offering grocery and foodservice supply chain solutions for convenience stores, mass merchants, drugstores and chain restaurants.