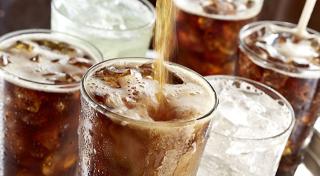 LAS VEGAS — In the foodservice category, prepared food is often the star of the show, but dispensed beverages can serve as a notable point of differentiation, enabling convenience store brands to stand out in the minds of thirsty customers.

Although the segment has seen improvement from the major hit it took early in the COVID-19 pandemic, there is still plenty of opportunity for retailers to boost dispensed beverage sales and drive profits, according to the 2022 NACS Show education session "Gulp! Reinvigorating Dispensed Beverages."

"The opportunity that exists is huge," said moderator Chris Rapanick, director, business development at NACS. He advised retailers to get an external benchmarking source, making a goal and stick to it, and avoid focusing on pricing and promotions all of the time.

Maverik encourages customers to be as creative as they want, but also posts its own recommended soda menu at the fountain machine with QR codes. Customers can try an interesting mixed beverage they've heard about, build their own creation or put their own spin on suggested combos, giving them practically infinite reasons to come back to a Maverik store.

"It's created some excitement for us," said Ryan Ratcliffe, dispensed beverage category manager at Maverik, who shared some of the TikTok videos the chain's customers have made about their custom drinks and shared online.

The mixology program also helps Maverik compete with the higher priced soda shops that are popular in Utah, according to Ratcliffe.

Jose Salinas, director, convenience and grocery channel at Marmon Foodservice Technologies, noted that the average attention span is 2.8 to eight seconds, and the c-store landscape needs to align with the digital world.

According to Salinas, 30 percent of restaurant customers find digital menus influential in their purchasing decisions, and 74 percent say effective menu display is their top priority in the order process. This provides "more reasons to have screens communicating what you've got going on in regards to ... flavors and programs," he said.

Dispensed beverage units equipped with screens can serve as engagement drivers and display different videos and graphics depending on the daypart to maximize the chance for impulse purchases at any hour.

Results make such equipment worth looking into — data shows a 3 percent to 19 percent sales increase when a digital interactive screen is added, according to Salinas.

To reinvigorate dispensed beverages, retailers require excitement, engagement and improvement of the experience. Laval, Quebec-based Alimentation Couche-Tard/Circle K reinvigorated its dispensed beverage offering by updating its Polar Pop brand. Although the company felt good about it overall, it also found that if it doesn't add anything new or exciting, "it becomes wallpaper," said David Hall, vice president of global foodservice.

The company partnered with PepsiCo's Mtn Dew brand to debut the exclusive Purple Thunder flavor and support it with a 360-degree campaign including off-site promotions and in-store merchandising to drive engagement.

Couche-Tard is also finding success through its Sip & Save subscription program, which offers one beverage every day for $5.99 a month. Loyalty drives frequency, and this value program allowed customers to see, engage and keep coming back, according to Hall.

Retailers need to make sure they practice maintenance on their dispensed beverage programs to avoid unimpressive displays or beverage outages. The goal is to "create the experience where we want to shop," Hall said.