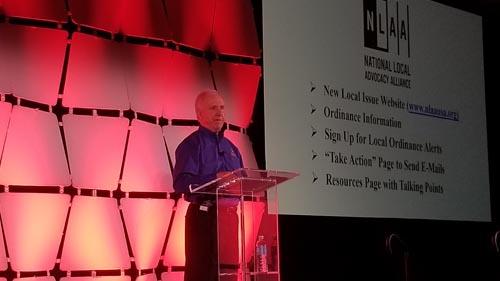 With only one month down in the year, 12 states are considering cigarette/tobacco tax bills. And it is just the beginning of the legislative season.

"It's still early, so this number will go up," said Thomas Briant, executive director of the National Association of Tobacco Outlets (NATO). "Usually, 25 states a year have bills."

Presenting NATO's Industry Update at the recent Tobacco Plus Expo 2020, Briant also pointed out that 15 states have electronic cigarette/vapor tax bills on their agendas. In addition, Massachusetts adopted a similar tax in November.

While state excise tax bills have long been a staple of local and state legislative dockets, flavor-ban measures have been increasing in popularity over the past few months — and this trend shows no signs of slowing down.

Those with 2020 total flavor-ban bills and laws include Vermont, New York, Virginia, Maryland, Indiana, Illinois, California, Alaska and Hawaii, according to the NATO Industry Update.

And tobacco legislation is not limited to the state level. Municipalities and counties are debating different tobacco ordinances, as well. According to Briant, California is the most active, followed by Colorado, Oregon, Minnesota, Massachusetts and New York.

The foremost local restrictions, he explained, are:

With the number of local ordinances growing, NATO began working at the local level in 2012. Last year, it stepped up its efforts with two new initiatives: the National Response Network (NRN) and the National Local Advocacy Alliance (NLAA) website.

The goal of NRN is simple, Briant said; it is "to get retailers engaged."

The NLAA website tracks local ordinances, and NATO is in the process of updating the site to include ordinances dating back eight years. The site also features a "Take Action" page and talking points for retailers.

"With all the local and state legislation that is targeting total tobacco sales, it is important that retailers engage with their legislators," Briant said, adding that retailers are the best resource to educate lawmakers.

"Being a retailer is not just about selling products," he continued. "Protecting your business now needs to be part of your business plan."

Moving Up a Level

Tobacco regulation at the federal level also ticked up as 2019 ended and 2020 began.

On Dec. 20, President Donald Trump signed a series of bills that included raising the federal legal minimum age to buy tobacco products to 21, a move many states have already implemented.

The Food and Drug Administration (FDA) is now required to publish its Implementing Regulation by June 17, 2020. Although the agency has time to update its regulations, the age change went into effect immediately.

"It is important to understand this federal Tobacco 21 law supersedes state law," Briant said, noting that this applies to any state exemptions for military members and grandfather clauses.

In addition to the new federal Tobacco 21 law, the FDA issued a policy guidance banning the sale of unauthorized flavored cartridge-based and pod-based vapor products. That policy went into effect Feb. 6.