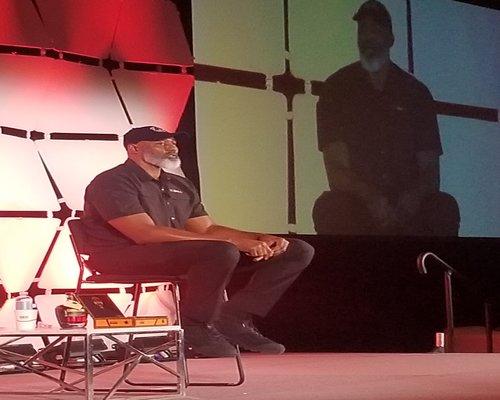 LAS VEGAS — Tobacco Plus Expo (TPE) 2020 kicked off with some star power as former NBA All-Star Karl Malone took to the stage to talk about his journey from athlete to entrepreneur.

Malone is well known in sports circles, and his accomplishments on the court include being the second all-time leading scorer and a two-time Olympic champion. He also was named the NBA's Most Valuable Player twice.

After Malone retired from the National Basketball Association, he began his next chapter as a businessman, first in car sales and now in cigars and spirits. On the tobacco front, he's developed a “Barrel Aged by Karl Malone" premium cigar in collaboration with Guillermo Leon Herbert, owner of LA Aurora. The cigar is made from tobacco aged in rum barrels. In addition, his daughter Kadee Malone owns Legends Cigar & Vape.

Both Malone and TPE started their journey into tobacco at roughly the same time — Malone retired from the NBA 17 years ago, and TPE marked its 16th year.

During his keynote speech at the event, Malone reminded attendees to follow their passion, but not forget about those who help make it happen.

"As business owners and entrepreneurs, we always say it's about us; we make the decisions. We forget about the little people in our company," he said. "News flash: Without your foot soldiers, you are nothing."

And while he has moved on from his basketball career, there is one thing that remains unchanged between then and now: teamwork — especially important in the tobacco industry, which is under fire from many fronts.

"You have to have a team," Malone stressed. "I may be the star, but it takes a team and you need to empower your team."

Billed as the first tobacco show of the year, TPE 2020 took place Jan. 29-31 at the Las Vegas Convention Center.

Under the banner of Tobacco Media Group (TMG), owned by Kretek International, Tobacco Plus Expo is a business-to-business trade show highlighting the full spectrum of tobacco, vapor, alternatives and general merchandise products available in the ever-evolving market.

Greeting this year's attendees at the entrance to the show floor was the New Product Showcase, displaying a range of exhibitors from CBD products to disposable vapor products, and new items in the cigar and premium cigarette segments.