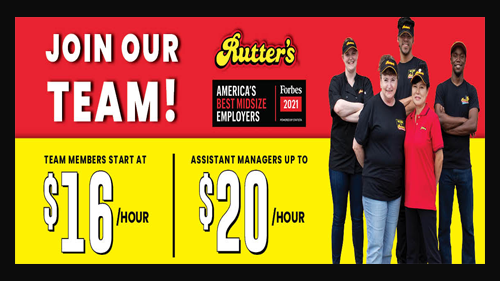 YORK, Pa. — Rutter's is once again investing in its team members by instituting an increase to its starting wage, which will now begin at $16 an hour.

This marks the third time Rutter's rose wages in 2021 and the fifth time in two years. Since December 2019, the company has increased wages by 40 percent.

The increase will impact team members and field employees, with full-time associates earning more than $33,000 per year. Employees at Rutter's corporate headquarters in York will also receive a 10-percent wage hike.

"At Rutter's, we believe in recognizing the hard work and dedication our fantastic employees," said Rutter's Vice President of Human Resources Suzanne Cramer. "We're thrilled to increase our wages again for our team members and field employees and want to thank them for their efforts that continue to make Rutter's an industry leader!"