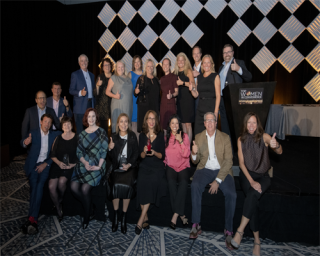 The eighth-annual TWIC Awards Gala honored the achievements of 74 exceptional women from the industry's retailer, wholesaler and supplier communities. TWIC is the first and only convenience store industry awards program that recognizes women for outstanding contributions to their companies and the industry overall.

"I'm very happy to report there is no shortage of talent in the convenience store industry," Paula Lashinsky, CSNews' vice president and brand director, said during her opening remarks. She listed resilience, strength, creativity and innovation as some of the common traits shared among the night's honorees.

Upon accepting her award, Ayles reflected on how she has spent the vast majority of her career in historically male-dominated industries. "Despite this, it has never occurred to me that my voice should not be heard," she said.

Ayles recognizes, however, that her experience may have been different from that of others, and emphasized the difference that mentors and role models can make.

"Leaders, particularly women leaders, have a responsibility to pull up the women behind us," she said. "Find those rising stars. Find those women who need to hear they are capable, and show them the way."

Bacon recounted an early interview during which a male interviewer asked if she was sure she wanted the role because, according to him, she didn't look like she belonged there. Twenty years later, women belong and work at all levels within Murphy USA, from entry level to sitting on the company's boards, she noted.

"Women are no longer the exception," Bacon said, expressing the need for further work, but also encouragement at the progress that's been made. "It's up to us to speak up. It's up to us to ensure that our voices are heard, [and] truly believe without a doubt that we belong."

RaceTrac's Isbill spoke of the lessons she has learned from a range of female role models, both in and outside of her company. These include the importance of authentic leadership, how to deliver a tough message in a direct but kind fashion, and what it looks like to show strength and courage while facing ongoing difficult challenges.

"It is obvious I would not be who I am today if not for these women," she said.

Jarratt credited the contributions of her team, whom she says have supported her and worked day in and day out for 7-Eleven's customers. She also expressed happiness in seeing an increasing number of women rising through the ranks while also raising families.

"I'm excited to be part of this shift in business and be a champion for change," she said.

Koenig took a moment during her acceptance speech to shine a light on the disproportionate burden the COVID-19 pandemic has had on women, who frequently bear the extra burden of childcare and whose careers have suffered as a result.

"I want to recognize every woman in this room as a top woman," she said. "We are here, we have made it, and we have supported our colleagues and loved ones through some of the harshest days in modern history."

She concluded by saying that she hopes with all of her heart that the world soon returns to a new normal, and she also hopes that "we have bottled up the best" that has come from the worst times during the past year and a half.