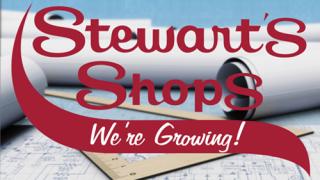 The convenience store operator's growth strategy calls for 20 new stores in 2020. The first five — including a 4,186-square-foot "Super Stewart's" — are already ringing up customers. The latest New York locations are in Albany, Port Henry, Rotterdam, Schodack and Clifton Park.

A sixth new store threw open its doors on New Corner Road in Albany on Sept. 17 and a seventh comes on line Sept. 23.

Another Albany Stewart's Shops, on Fuller Road, was the first to kick off the new store openings when it welcomed shoppers in January. The others will celebrate their grand openings on a rolling basis Sept. 18 through Oct. 16.

"We may be setting company records opening six shops in three short weeks, yes you read that correctly, six shops in three weeks. Our construction crews, district managers, marketing teams, and gas team are busier than ever," the company said on its website.

According to Stewart's Shops, the new locations are part of its commitment to meet the growing customer needs, offering a wider variety of food and beverage options, and to make the customer shopping experience easier.