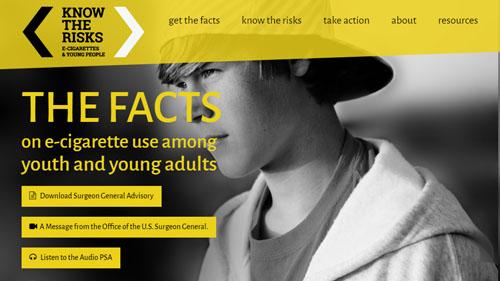 WASHINGTON, D.C. — As the Food and Drug Administration (FDA) grapples with underage use of electronic cigarettes, the U.S. Surgeon General issued an advisory on the subject.

"The recent surge in e-cigarette use among youth, which has been fueled by new types of e-cigarettes that have recently entered the market, is a cause for great concern. We must take action now to protect the health of our nation’s young people," Adams said.

Similar to FDA's comments on e-cigarettes and vapor products, Adams also called out Juul. The San Francisco-based vapor company has soared in popularity among underage users.

"We must take aggressive steps to protect our children from these highly potent products that risk exposing a new generation of young people to nicotine. The bad news is that e-cigarette use has become an epidemic among our nation’s young people," he said. "However, the good news is that we know what works to effectively protect our kids from all forms of tobacco product use, including e-cigarettes. We must now apply these strategies to e-cigarettes, including USB flash drive-shaped products such as Juul.

"To achieve success, we must work together, aligning and coordinating efforts across both old and new partners at the national, state and local levels. Everyone can play an important role in protecting our nation's young people from the risks of e-cigarettes," Adams said.

Last month, Juul Labs unveiled steps to combat underage use of its products, as Convenience Store News previously reported. For example, on Nov. 13, it stopped taking retail orders for its flavored Juul pods, effectively removing them from more than 90,000 retail locations.

Going forward, Cucumber, Mango, Creme and Fruit pods will only be available online. Its tobacco and menthol-based products consist of Virginia Tobacco, Classic Tobacco, Mint and Menthol were not affected by the decision.

Juul's move came just days before FDA Commissioner Scott Gottlieb issued several directives the agency's Center for Tobacco Products, including revisiting its policy regarding menthol cigarettes and flavored cigars and restricting the sale of flavored vapor products to age-restricted, in-person locations and, if sold online, under heightened practices for age verification. This directive includes all flavors other than tobacco, mint and menthol.