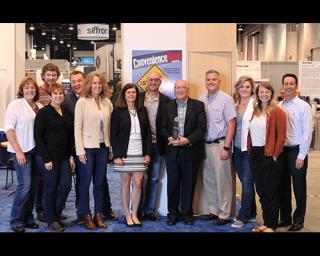 Maverik’s senior executives and foodservice team proudly accept the 2018 Prepared Foods Innovator of the Year award at the NACS Show.

This is the fifth time that Salt Lake City-based Maverik, which operates more than 300 stores in 11 western states, has won a Foodservice Innovators Award. In 2012 and 2016, Maverik was honored for Best New Foodservice Offering. In 2013, the retailer won for Best Foodservice Limited-Time-Offer (LTO) or Promotion, before winning the Foodservice Innovator of the Year award in 2014.

The other 2018 Foodservice Innovators Awards honorees are:

Chosen by the Convenience Store News Foodservice Advisory Council — a panel of foodservice experts from the retailer, supplier, wholesaler, research and consulting fields — winners are recognized for raising the bar on quality, service and innovation in the fast-growing and critically important foodservice category in the convenience channel.

"With the combination of Adventure’s First Stop and Bonfire Grill, Maverik has been very innovative with branding itself and using its foodservice program to become a serious food destination in the company’s core markets," said one member of the CSNews Foodservice Advisory Council, who were impressed with the retailer’s prepared foods offering.

"The Bonfire line is on-trend, flavorful and provides variety. It also aligns with their overall branding and marketing strategies, keeping the customer experience fluent throughout the chain," said another Foodservice Advisory Council member.

The Bonfire brand, originally introduced in 2009, ties Maverik’s food items together under a single identity with an adventurous theme. By the fall of 2013, Maverik decided to take its foodservice to the next level by launching the new Bonfire Grill made-to-order program.

The Bonfire Grill concept, an open kitchen where customers can watch the preparation of items like pizza and tacos, began testing in late 2014 and is now included in all new-build Maverik stores. Maverik stores have also been redesigned, placing food front and center.

Other significant moves that have built up Maverik’s foodservice program are:

This year, Maverik launched a new fresh sandwich line to replace its hoagies, which consisted of meat and cheese in a hoagie roll that the customer purchased and then dressed themselves.

The new, fresh line of ready-to-eat sandwiches starts with new bread and also includes new meats and cheeses, and new sauces. Preparation steps have been developed that allow Maverik team members to dress the new sandwiches without them getting soggy.

Varieties include California Club, Turkey Gouda, Righteous Italian, and Buffalo Chicken Ranch. The new sandwiches were first tested in two stores, then expanded to a 10-store test to see actual sales results, and then moved to 30 stores to ensure ingredient distribution was right before being rolled out across all locations.

"Foodservice is an important part of Maverik’s business model, and is becoming even more critical," said Brian Sullenger, the retailer’s FRESCH category manager for grab-and-go. "We’ve been in the foodservice business a long time and our customers have come to trust that we have quality food for a competitive price."

Sullenger also told Convenience Store News that Maverik recently extended its Hispanic menu into nachos and salads, and plans are in the works for line extensions in the retailer’s most successful prepared food segments.