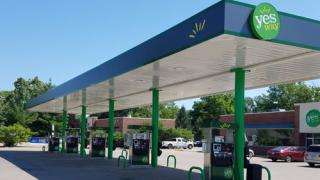 DES MOINES — Since coming onto the U.S. convenience store scene in late 2015, Yesway has grown by a series of small acquisitions. Now, it is ready to begin its largest integration to date with the Allsup's brand.

On Oct. 8, Yesway announced it reached a definitive agreement to purchase Clovis, N.M.-based Allsup's Convenience Stores and its portfolio of 304 stores in New Mexico, West Texas and Oklahoma.

Yesway entered the convenience channel with the intention of expanding its business — reaching approximately 150 c-stores by mid-2019. During its M&A journey, the company began talking with Mark Allsup, president of the Allsup's chain, and the Allsup's family after founder Lonnie Allsup passed away in January 2018.

Together with his wife Barbara, Lonnie Allsup opened the family's first location in Roswell, N.M., in 1956. The company remained a private, family-owned business throughout its six-decade history.

"Over the past three and a half years, we spent a great deal of time and money growing our portfolio and building out our systems, including state-of-the-art technologies. Allsup's has a destination foodservice operation with a very loyal following, which we intend to expand into our Yesway stores, and we believe that we can implement many of the programs and systems we have created into the existing Allsup's stores," he explained. "There are tremendous synergies between the two organizations. It is also a great fit geographically."

For example, Allsup's does not have a loyalty program or a fleet card program, two key initiatives at Yesway. In fact, Yesway won the 2018 Paytronix Loyaltee Award for Best Convenience Store Loyalty Launch for its Yesway Rewards program. The c-store retailer built and launched Yesway Rewards on the Paytronix platform in June 2017. Initially introduced at 37 stores, the program soon became an integral part of the brand's expansion, as Convenience Store News previously reported.

"Allsup's does not currently offer its customers a loyalty program. We  believe that implementing a customer loyalty program at Allsup's will be a tremendous benefit to their many loyal customers, " said Trkla.

Once the deal is finalized, the Allsup's brand will not be disappearing from the convenience store landscape.

"We are going to keep the Allsup's banner," Trkla explained. "This is a 63-year iconic chain with very good brand equity and very good brand awareness in the marketplace."

Yesway, which is operated by BW Gas & Convenience, an affiliate of Beverly, Mass.-based Brookwood Financial Partners, has hired post-merger integration and branding experts to assist in the integration process.

"We are keeping the Allsup's name where Allsup's stores exist and are looking at possibly rebranding some existing Yesway stores to Allsup's stores — certainly in Texas, New Mexico and Oklahoma," he shared.

The integration process will be "slow and deliberate," according to the chief executive.

"Given the high quality of the brand and of the reputation of Allsup's in its marketplace,  we believe it is going to be an easier integration than some of our other portfolio acquisitions," he added.

Part of the integration process will be looking at the best practices each chain brings to the table. Yesway has been building out its foodservice offering for nearly four years — refining products and trying different things. Yesway also inherited several foodservice platforms through its many acquisitions since forming in December 2015.

"But obviously, we are not going to touch the Allsup's Burrito. It is iconic and almost reverential," Trkla said. "It makes a lot of sense to us to sell Allsup's fried food platform and its signature burrito in Yesway stores."

Aside from foodservice, Yesway also plans to look at both chains' private label programs and see where they overlap, where they don't, which is best, and whether there may be some differentiation in terms of product offerings.

Technology will be an area of focus, too, right off the bat.

"A lot of our initial focus will be on technology — putting in new systems from PDI and PriceAdvantage, as we did at Yesway, that they don't have at Allsup's. We can create a lot of value that way," Trkla said.

Emphasizing his respect for the Allsup's family, Trkla noted that they've run an incredibly efficient chain that does things very well.

"At Yesway, we had the advantage of starting the firm with a blank sheet of paper. We were able to study industry best practices and integrate them into our culture and into our systems. They ran things very well for 63 years at Allsup's and had no need to change things that were working so well," he stated.

"Any acquisition is by definition an integration and the larger it gets, the more complex it gets," Trkla acknowledged. "We appreciate and are respectful of the challenges of integrating two large organizations, but we are hopeful that because of how well Allsup's has been run and how consistent their merchandising and foodservice platforms are, we will be able to do so without much difficulty."

Moving forward, all Allsup's employees will remain with the company for now. Part of the integration process will be evaluating where there is organizational overlap. However, Trkla does not expect to have too many duplicate positions.

Barbara Allsup will stay on through the next few months to assist with the integration. She will work closely with David Potter, Allsup's controller, and Ericka Ayles, Yesway's chief financial officer. Mark Allsup also will stay on as president.

"We are going to do our best to take care of the people on both sides of this transaction, as respectfully as we can, in this integration," Trkla said.

In regards to future growth, he noted that Yesway always has a very active pipeline, but  that's slowed down as the company worked on this latest deal. Most important to Yesway and to Allsup's right now is that they do this integration well.

"Our primary focus is going to be on integrating these two companies over the next six, nine, 12 months," Trkla said. "I will not say we will not acquire more stores in this time period, but we are not going to take on another large acquisition until we have fully integrated this one."