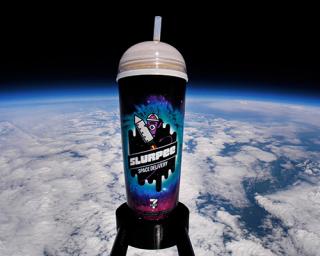 IRVING, Texas — 7-Eleven Inc. delivered a Slurpee to the most distant destination yet: space.

At 11 a.m. on Aug. 10, the Slurpee rocketed out of the Earth's atmosphere on a private space flight commissioned by the convenience store retailer in honor of its 94th birthday.

The far-traveling Slurpee launched from a 7-Eleven store in Michigan, known as the Slurpee capital of the United States because the state consumes the most Slurpee drinks.

Fans collectively selected Coca-Cola as the first Slurpee flavor to go to space. It was the most popular flavor ordered via 7-Eleven Delivery in the 7-Eleven app during the month of July, as Convenience Store News previously reported. Cherry and Blue Raspberry were close runners-up.

"Every Slurpee lover has an unwavering passion for their favorite flavor, so it's my pleasure to congratulate the Coca-Cola Slurpee drink fans out there on a pretty big victory," said Marissa Jarratt, 7-Eleven senior vice president and chief marketing officer. "Winning flavor aside, delivering our iconic Slurpee drink to space and bringing customers along for the journey was the most epic way to wrap up one of the brand's best birthdays to date. Year 94 will be a hard one to top… literally."

In addition to selecting the spacebound flavor, 7-Eleven Delivery orders placed in July also counted as entrances for the chance to win one of the exclusive cups that went to space as a #SlurpeeSpaceDelivery memento.

7-Eleven commemorated the out-of-this-world occasion with a space-themed mural at the store where the Slurpee took off. Fans can take a selfie at 10950 Gratiot Road in Saginaw, Mich., or view photos on social media channels for 7-Eleven and Slurpee.