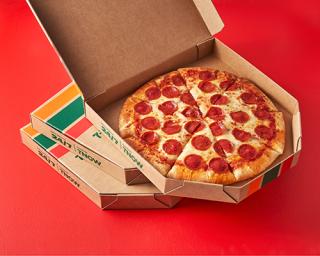 NATIONAL REPORT — As consumers prepare to celebrate the unofficial end of summer over the Labor Day holiday weekend, convenience store operators are offering special deals that commemorate the transition to fall.

7-Eleven Inc. customers can celebrate Labor Day and National Cheese Pizza Day at the same time on Sept. 5. The convenience retailer is offering first-time users of its 7NOW delivery service the opportunity to redeem a free cheese or pepperoni whole pizza pie with any order on the mobile app when they use the code PIZZA.

Existing 7NOW customers can join in the double-celebration a few days early. From Sept. 2 through Sept. 4, they can order a cheese or pepperoni pizza for $5 via 7NOW only.

This is the latest of special pizza offerings from the retailer. In August, 7-Eleven invited customers to "cheese the day" by trying out two new pizza varieties. Veggie and Breakfast Pizzas are now available by the slice or as whole pies at participating 7-Eleven, Speedway and Stripes convenience stores.

Based in Irving, Texas, 7-Eleven operates, franchises and/or licenses more than 13,000 stores in the United States and Canada. The company also operates and franchises Speedway, Stripes, Laredo Taco Co., and Raise the Roost Chicken and Biscuits locations.

GPM Investments LLC is offering a variety of promotions across its network of convenience stores over Labor Day. Customers who are members of the company's fas REWARDS loyalty program can buy an iced coffee in any size for 99 cents each.

Additionally, GPM customers can buy two 28-ounce bottles of Gatorade and get one free, as well as earn 2 cents off per gallon of fuel purchased.

Customers enrolled in fas REWARDS can stack cents off fuel to earn up to $1 off per gallon of fuel over Labor Day weekend, making it easier for them to hit the road without worrying about their wallets.

The Labor Day weekend deals mark the conclusion of GPM 's 100 Days of Summer promotions program, which kicked off on May 6. For the duration of the program, the convenience store operator partnered with various suppliers to provide loyalty members with limited-time opportunities to stack their savings.

Richmond, Va.-based  GPM Investments is a wholly owned subsidiary of ARKO Corp., a family of community brands. It operates or supplies stores in 33 states and Washington, D.C. As the sixth largest convenience store chain in the country, GPM has more than 3,000 locations comprised of approximately 1,396 company-operated stores and 1,625 dealer sites to which it supplies fuel.

In addition to deals on food and beverages, convenience store chains are offering other ways to save over Labor Day weekend. Circle K gave drivers 40 cents off per gallon of fuel between 4 p.m. and 7 p.m. local time during Circle K Fuel Day on Sept. 1, as Convenience Store News reported.