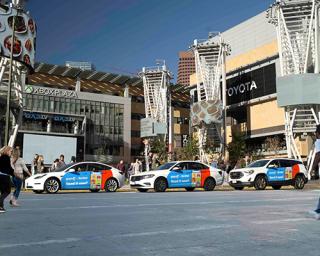 WILMINGTON, Del. — Convenience store operators that have ventured into the home delivery space are taking a new step to gain market share in the crowded space: partnering with rideshare advertising company Carvertise to wrap fleets of rideshare vehicles to tout their delivery offerings in certain target markets.

Home deliveries from convenience stores more than doubled during the last quarter of 2020 and since then the trend shows no sign of slowing, according to the company. As c-store operators pivot to home delivery, they are leveraging Carvertise to deploy the attention-getting vehicles and remind consumers that dinner can be on their doorstep in just a few minutes.

"There's no doubt that C-stores are hungering to get a bigger piece of the ever-growing home delivery pie," says Greg Star, co-founder of Carvertise. "What better way to entice consumers than by driving vehicles with high-impact designs and mouth-watering images through the communities and neighborhoods they serve?"

To make an even stronger impression, many c-store operators that partner with Carvertise have rideshare drivers distribute marketing materials, which often include QR codes, to riders. They can also activate Carvertise's "SWARM" feature, which calls for the branded cars to congregate at major gatherings, such as sporting events, concerts and festivals, which significantly raises the profile of their advertising, the company said.

"Carvertise provides an interactive out-of-home component (OOH) with our campaigns that other forms of OOH advertising simply cannot provide," Star said. "There's no better way to engage a crowd than to essentially drive a billboard through the party. That's something other ad mediums just don't offer."

The company's data and tracking technology offers c-store partners the ability to see previously inaccessible metrics via digital retargeting and weblift analysis, offering a new level of insight into the effectiveness of their campaigns.

"Our c-store partners tell us our branded cars are the most enticing medium they've seen," Star said. "Indeed, the proof is in the pudding: Statistics from a 2019 Nielsen out-of-home study reveal that wrapped cars are proven to be the most effective and memorable form of transit advertising."

Wilmington, Del.-based Carvertise runs wrapped-car ad campaigns around the country through a network of 550,000 registered drivers.