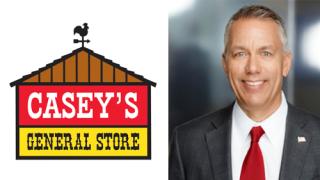 NEW YORK — Almost two years after diving into its value creation plan, Casey's General Stores Inc. is ready for its next step as a leading company in the U.S. convenience store industry.

The retail chain's executives, including President and CEO Darren Rebelez, discussed the future of Casey's at its 2020 Investor Day, held Jan. 9 in New York.

Rebelez, who joined Casey's in the lead role on June 24, said he "couldn't be more excited about what the future holds for this tremendous brand."

Over the past several months, the executive team has been assessing the company's current situation and capabilities, and charting a path for continued growth over the next several years, according to the chief executive.

Moving forward, Ankeny, Iowa-based Casey's plans to strike a balance between accelerated growth and capability building, which will set the company up for the long term.

With more than 2,200 convenience stores across 16 states, a Store Support Center and two distribution centers — with a third distribution center currently under construction in Joplin, Mo. — Casey's was originally built to bring convenience food and services to smaller communities throughout the Midwest. As time has passed, Rebelez explained that the chain has evolved to bring its business to larger communities.

"Consumer preferences are evolving rapidly and the need and desire for convenience has, perhaps, never been greater," he said. "We will continue to invest in the business to become a bigger, better, more contemporary version of ourselves — a version that will have new and enhanced capabilities that will allow us to drive performance and growth in today's challenging retail environment."

One aspect of Casey's business that has not changed over the past 50 years, according to Rebelez, is its purpose "to make life better for communities and guests everyday."

As the company moves into the new decade, it will remain committed to that purpose, while pursuing growth around various strategic pillars.

"Our goal is to deliver top-quintile EBITDA growth among our S&P 500 retail peers," said Rebelez. "We are going to accomplish that through three different strategic pillars."

The pillars will be supported by investment in its talent to drive a performance-based culture, according to the CEO.

"We will continue to invest in bringing the right talent to the organization to complement the existing group of tenured Casey's team members to build a high-performing team," Rebelez shared. "We will also build a culture where every Casey's team member has the ability to be the best version of themselves and perform at a high level."

This is the first article in a four-part series on Casey's Investor Day.