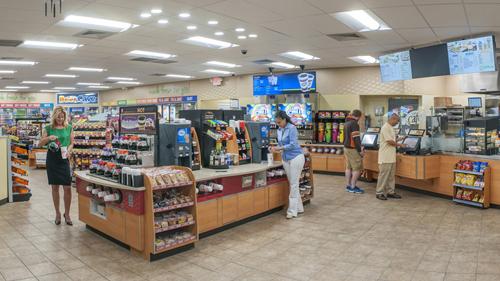 Marathon Petroleum executives are optimistic the retail network will tick up in the second half.

FINDLAY, Ohio — Speedway LLC's convenience store network stumbled slightly in the second quarter of 2018. However, its parent company, Marathon Petroleum Corp. (MPC), believes two pending transactions will help turn things around in the second half of the year.

"Our focus continues to be optimizing total gasoline contributions between volume and margin as market conditions adjust," Don Templin, president of MPC, said during the company's second-quarter earnings call on July 26.

Moving into the second half of the year, Speedway's pending acquisition of the Express Mart convenience store chain from Petr-All Petroleum Consulting Corp. and its pending merger with Andeavor could help bolster the retail network's numbers, Templin explained.

"We are optimistic about the second half of the year for Speedway, as we are expecting to close on the acquisition of 78 store locations in Syracuse, Rochester and Buffalo, N.Y. in the third quarter," he said. "These stores will enhance our existing network and expand our brand presence in key growth markets.

"The completion of the pending Andeavor combination will add store locations to Speedway's marketing territory, establishing a coast-to-coast presence," Templin continued. "With its industry-leading retail position and loyalty program, Speedway is well situated to expand over this nationwide footprint."

However, the numbers are looking up so far in the third quarter.

A Closer Look aT Operating EXPENSES

As Speedway President Tony Kenney pointed out, the rise in operating expenses was driven by two key factors.

First: wage inflation as a result of low unemployment rates across the United States. "That's putting competition for that labor at the store level. We're having to move hourly rates up in order to track that labor," he stated.

To help combat the rising labor costs, Speedway is looking at a number of technology investments, both inside and outside the store, to become more efficient, so it can reduce labor costs, or control the labor costs, to the point that it is competitive in that regard, according to Kenney.

Second: Speedway's expanding portfolio is also contributing to the uptick in labor costs. Notably, the chain added 15 net convenience stores in the second quarter of 2018.

"There are more stores in our portfolio, and we are also adding more complex stores," Kenney said. "As we spend money on remodels and add foodservice, that is going to drive operating costs to perform those functions in a more complex operating environment."

However, Speedway's technology platform will add to the merger's expected synergies, according to Gary Heminger, chairman and CEO of MPC.

"One of the things we talked about with the merger with Andeavor, [with] our labor model — the platform that we run all of our convenience stores we are going to be able to, in a very short order, transfer that type of technology into those stores," Heminger explained. "That will take some time, but it is one of the key synergies, and I think a key operating efficiency, that we are going to be able to transfer into those stores."

In all, Marathon and Andeavor are targeting $1 billion in run-rate synergies within the first three years of the merger.

Findlay-based MPC is the nation's second-largest refiner with a crude oil refining capacity of approximately 1.9 million barrels per calendar day in its six-refinery system. Marathon brand gasoline is sold through approximately 5,600 independently owned retail outlets across 20 states and Washington, D.C.

The Express Mart sites are located primarily in the Syracuse, Rochester and Buffalo markets.