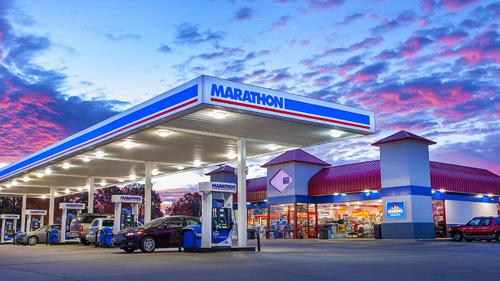 Marathon is reported to be mulling bringing the fuel blend to stations in Minnesota.

FINDLAY, Ohio — Marathon Petroleum Corp. (MPC) could be adding E15 to its gas stations in Minnesota.

According to Bloomberg, E15 would help Marathon compete with other retailers who already offer the higher blend at their pumps. It would also curry favor with political leaders in Minnesota. The state is the fourth-biggest U.S. producer of corn-derived ethanol.

The news outlet cited people familiar with the matter.

Marathon's possible entrance into E15 sales comes as President Donald Trump said he plans to lift restrictions on E15, paving the way for year-round sales. Currently, retailers throughout most of the U.S. are prohibited from offering E15 to drivers during the summer months, according to Growth Energy.

More than 1,600 stations across 30 states include E15 at the pump. Minnesota leads the U.S. in E15 stations, according to Growth Energy.

E15 is a fuel that contains 15-percent ethanol and works well for any car 2001 and newer. Today, American drivers have surpassed 5 billion miles on it.

"We don't have any information to provide on this matter at this time," Jamal Kheiry, a spokesman for Marathon, said in an emailed statement in response to the news outlet's questions about the E15 plans.

The number of E15 stations currently stands at 1,400 across 30 states.

The fuel offering will come to more than 120 c-stores in the Northeast across reformulated gasoline markets.