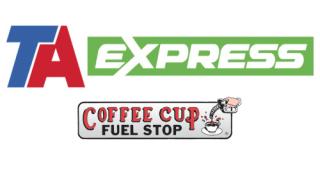 WESTLAKE, Ohio — In 2018, TravelCenters of America LLC (TA) sold its standalone convenience store business and made the shift to concentrate on its core travel center business. Growing that network is a key goal for 2019.

"Four of these [Coffee Cup] locations are already in operation in North and South Dakota and are expected to be rebranded TA Express within 12 months, with the first site expected to be converted by the end of April," Barry Richards, TA president and chief operating officer, said during the company's fourth-quarter and full-year 2018 earnings call on Feb. 26.

There are also plans for two new-build locations over the next several years as part of the Heinz Inc. agreement, Richards added, which will bring the total to six.

The first location to be rebranded is on Interstate 94/North Dakota Highway 3 in North Dakota. The remaining Coffee Cup Fuel Stops converting to TA Express are in Vermillion, Summit and Hot Springs, S.D. The two new-build TA Express travel centers are slated to be constructed in Rapid City and Sioux Falls, S.D.

"Our pipeline of franchising inquiries is robust," Richards reported. "We're in serious and late-stage discussions and negotiations with a number of operators regarding possible franchising of an additional five travel centers, and have dozens of other sites in various stages of our franchising process."

"We think independent travel center operators appreciate the brand strength associated with a TA or Petro location, as well as the trucking fleet fueling agreements they can leverage for increased sales volume," he added.

What's Next for Growth

CEO Andrew Rebholz said TA aims "to increase shareholder value through consistently improving our financial results and condition, continuing to present a superior customer service model to our traditional and non-traditional customers, and expanding our customer base, with our focus remaining on our core travel center business."

There are four key elements in the company's value creation plan and chief among them is expanding its travel center network.

"Over the last several years, while we were devoting time to growing and upgrading the standalone convenience store network, our larger competitors were growing their travel center footprints," Rebholz explained. "We want to provide a larger number of stopping points for customers this year. We expect to accomplish this through a combination of acquiring, franchising and/or building new sites and we can do this utilizing our TA, Petro and TA Express travel center brands."

The company's goal is to add 20 travel centers to its network this year, and the chief executive expects franchising opportunities to drive this.

Acquisitions remain on the table as well. "Though there is nothing yet far enough along to claim a win, we have a handful of potential targets under discussion for evaluation," Richards said. "As noted earlier, one of our goals for 2019 is to add 20 sites to our travel center network and I intend to see that it is done."

TA is having "a number of good conversations" for some properties, Rebholz said, including the potential acquisition of two vacant properties for new builds.

"In both cases, I think it would be a TA Express for that particular market. I find that exciting because I really want to build one of those new and show what it can do," he said. "There are a handful of other [property opportunities] we are kicking around; some further along than others. ... I think we have a good opportunity to acquire throughout the year three to five travel centers."

However, Rebholz reiterated that he expects most of this year's growth to come from franchising, and he hopes to announce more signings soon.

"There are literally dozens of other independent operators who seem very interested and, from our perspective, seem like the kinds of travel centers that we would be proud to have as part of our travel network," he said. "Twenty is the goal that we have, and Barry is the one responsible for making it happen. As with all goals he is given, he is like a bulldog with getting them done."

That being said, TA is "not going to do anything stupid," Rebholz added.

"We're not going to pay too much for a site. We're not going to enter a franchise agreement with a site that doesn't really convey the right brand standards just to hit that goal because we said it out loud to the world," he said. "But with what we can see right now, we think that is achievable."