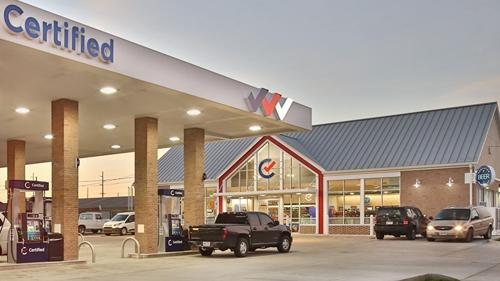 The Certified Oil transaction will help extend the U.K.-based retailer into new markets.

The stores are located in Kentucky, West Virginia and Ohio. In total, they employ 650-plus associates.

Based in Columbus, Ohio, Certified Oil has been operating in the Midwest since 1939. Founded by Carlyle Baker, the company is led by his grandson Nick Lacaillade, a third-generation owner.

"Our focus has been the customer and the communities we serve; our people, working in the stores, are like family," Lacaillade said.

"The connection the store teams have with the customers in the community and the locations of the stores are highly complementary to EG Group's existing U.S. operation," said Jay Erickson, president of EG America.

"We are looking forward to welcoming the Certified family to the team and supporting them in continuing their customer focused service established 80 years ago by [Baker]," he added.

As part of the Kroger transaction, EG Group established its North American headquarters in Cincinnati.

In December, EG Group expanded to 988 stores with the acquisition of the Minit Mart portfolio from Westlake, Ohio-based TravelCenters of America LLC and the opening of a new Turkey Hill location in Pennsylvania.

"This acquisition is in line with our strategy to expand in large growing markets like the United States. The acquisition of Certified Oil is an exciting value creation opportunity for the EG Group and underpins another significant step in our North American adventure." explained Mohsin Issa, founder and co-CEO, EG Group.

"Given the recent market interest in similar assets in the U.S., the sector presents significant growth potential. Being a leading market operator, EG Group is well positioned to take advantage of such opportunities," he said. "The 69-site network secured will also enable EG Group to extend its reach into new state geographies. We look forward to investing in the assets and improving the existing consumer offer."

Zuber Issa, founder and co-CEO, called the Certified Oil acquisition "an important step in building out our U.S. roadmap and will enable us to build a stronger market presence."

Fifth Third Securities served as exclusive financial advisor to Certified Oil in the transaction. The transaction is subject to regulatory approval and customary closing conditions.

Founded in 2001 by the Issa Family, U.K.-based based EG Group has established partnerships with global brands such as ESSO, BP, Shell, Carrefour, Louise Delhaize, SPAR, Starbucks, Burger King, KFC, Greggs and Subway. The company employs more than 30,000 colleagues in approximately 5,200 sites across Europe, Australia, and the U.S.