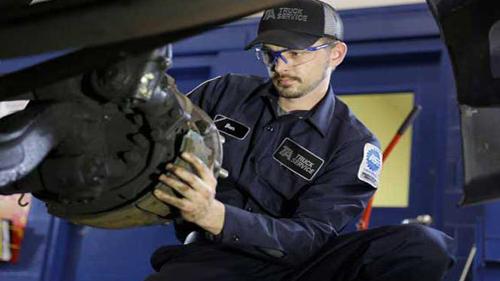 WESTLAKE, Ohio — The size and reach of its travel center network is not the only area of growth on TravelCenters of America LLC's (TA) radar. Over the past few years, the Westlake-based company has been building up the variety of services it offers to professional drivers — and this initiative shows no signs of slowing down.

"For the first quarter of 2019, our financial and operating plans were successful. We are delivering against our goals to provide better year-over-year results, more locations and, within each location, the preferred products, services and customer service for drivers and their trucks," CEO Andrew Rebholz said during TA's first-quarter 2019 earnings call, held on May 7.

In Q1, overall fuel sales volume and non-fuel revenues improved by 3 percent and 4 percent, respectively. On a same-site basis, the increases were 2 percent and 2.7 percent, respectively. Within TA's non-fuel revenues, store and retail services revenue grew by 5.9 percent. This was driven in part by the chain's revamped UltraONE 2.0 loyalty program, which its customers are embracing. Truck services revenue also continued to grow in Q1, driven by increased demand for TA's services provided offsite.

"We continued to see positive signs from our travel center operations in the first quarter. Strong freight trends and, we believe, our business initiatives and marketing efforts led to increases over the prior-year quarter in fuel sales volume, non-fuel revenues and site-level gross margin in excess of site-level operating expenses on an adjusted basis," said Barry Richards, president and chief operating officer.

Chief among the initiatives was the launch of the revamped UltraONE loyalty program, introduced in early January. "This program continues to be embraced by professional drivers," Richards said.

The program's chief goals are to:

"During the first quarter, we attracted approximately 30,000 new and reactivated members and, as anticipated, realized increased gallons per transaction," Richards explained. "We know that with each visit of an UltraONE member, there is an amount of non-fuel revenue that is earned in addition to the fuel sales, so capturing more of the truckers' fuels stops is important."

TravelCenters of America also has been investing in its Truck Service division. Among the efforts around this initiative, TA is slated to begin operating a new standalone truck service facility in June.

TA's on-site and RoadSquad are primary drivers behind the uptick in truck services revenue, according to Rebholz. However, it's hard to quantify because of how the services are interconnected, he said.

"If we send a truck out on an emergency repair, for instance, and they sell a tire or put a tire on the truck ... part of [that] goes to RoadSquad. There is a connection; it's hard to break it up precisely," he added.

"We've earned the confidence of a number of large customers who enjoy the improved reliability and uptime from our equipment being properly maintained," Richards said. "We expect significant increases in revenues with these customers."

In addition, TA's national call center — which supports its fleet of RoadSquad emergency repair vehicles — continues to attract fleet customers that retain the company to handle breakdown calls and allow them to focus on deliveries. Currently, TA has agreements with 93 fleets to handle their calls on either nights, weekends or 24/7.

At the same time, TA's retread plant is helping to boost sales within its commercial tire network by assisting fleets and managing their vehicle retread programs. TA acquired a 32,000-square-foot retread center in Bowling Green, Ohio, in mid-2018, as CSNews previously reported.