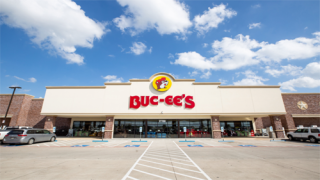 LAKE JACKSON, Texas — As the saying goes, things are bigger and better in Texas, and the newest Buc-ee's is set to be the biggest and best yet.

The Lake Jackson-based retailer confirmed plans to replace an existing travel center in Luling, Texas, with a more than 75,000-square-foot structure, making it the largest Buc-ee's ever built.

Located at 10070 I-10, the new Buc-ee's Luling will be built next door to the current store, allowing for a seamless transition from old to new structures, the company stated. Construction on the new site is tentatively slated to begin this fall.

The original Luling Buc-ee's was constructed in 2003 and is the brand's first family travel center.

"Twenty years ago, Beaver and Don had the gumption to change the industry by building the first Buc-ee's Family Travel Center in Luling," said Stan Beard of Buc-ee's. "Since that time, Buc-ee's has grown into an iconic Texas brand that now shares our Texas pride with new stores throughout the Southeast and West. We are humbled to have this opportunity to strengthen our roots in Texas and will continue to exceed our customers' expectations every chance we get."

Throughout the project, Buc-ee's corporate development team worked closely with local partners, including the City of Luling, the Luling Economic Development Corp. and Caldwell County.

The new Buc-ee’s Luling will offer 120 fueling positions and thousands of snack, meal and drink options for travelers on the go, as well as the same award-winning restrooms, cheap gas, quality products, and excellent service that have won the hearts, trust and business of millions in the South for nearly 40 years, according to the retailer. Buc-ee's favorites including Texas barbeque, homemade fudge, kolaches, Beaver nuggets, jerky, and fresh pastries will all be available.

Earlier this year, Buc-ee's announced it would break its own world record for the world's largest convenience store with a new 74,000-square-foot flagship travel center in Sevierville, Tenn. The location, close to Knoxville, will surpass the 66,335-square-foot Buc-ee's that currently operates in New Braunfels, Texas. The size of the Luling site eclipses both of these travel centers.

Founded in Lake Jackson in 1982, Buc-ee's operates 35 stores across Texas. The travel center operator kicked off its multi-state expansion plan in 2019. Since then, it has opened two travel centers in Alabama, two in Florida, and two in Georgia.

Buc-ee's recently opened its first stores in Kentucky, South Carolina and Tennessee, and is making its foray into Colorado, marking the first Buc-ee's outside the South. Breaking ground on the inaugural location last month, the Johnstown Buc-ee's will be located at 5201 Nugget Road, at the southwest corner of I-25 and County Road 48. It will boast 74,000 square feet and offer 116 fueling positions.

The retailer also announced the development of its first stores in Mississippi and Missouri earlier this year.