With more consumers on the go, the need for convenient shopping remains important. The in-store shopping experience is critical to retain traffic and grow baskets. Here are lessons we’ve learned on what shoppers are looking for at their local convenience store and how we’ve encouraged retailers to apply it to beer:

1. Outdoor signage can play a role in driving traffic and sales. Exterior signage and window displays add curb-side appeal to your store. In fact, 76 percent of shoppers indicate they entered a store they never visited before simply based on its signage1. Doing a good job here can help convert foot traffic into store traffic.

Beer is an important traffic driver, as well. Some 45 percent of the time, beer is the sole motivator to shop at a convenience store2. Making shoppers aware you sell beer through outdoor signage is key. And, if you have a beer cave, you should clearly communicate this, as well. Because beer shoppers are loyal — with 51 percent coming back to the same store —touting your beer cave with external signage will help ensure your store is (or becomes) a destination for beer shoppers.3 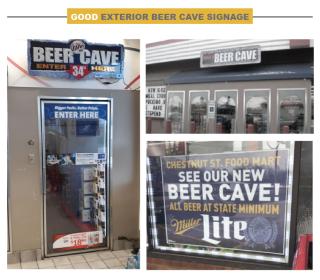 2.  Get consumers in and out quickly. Shoppers’ need for speed remains, with 47 percent saying they prefer to get in and out quickly4. The average shopping time in store is now about 2 minutes, down 15 seconds compared with a year ago5. Store layout and aisle flow help influence shopping behavior, and when done right, are key to a store’s prosperity.

When it comes to beer, shoppers need to find their brand in seconds as they spend less than 20 seconds at the cooler door. One third of shoppers who can’t find their beer leave empty-handed. If they find their beer in the first 10 seconds, they buy two more items in the store, on average6. The key is purpose-driven purchasing. Lead with singles and stock in one door to yield an average 18 percent lift in velocity7. Organize remaining space according to the recommended aisle flow in the image below to best align with consumer occasions and shopper preference.

3.  Ensuring a clean store paves the way for easy shopping experience. Frictionless shopping isn’t just about speed at checkout, but also the ease of navigation throughout the store. Consumer expectations are changing, with more placing emphasis on a store’s atmosphere, organized shelves, clear pricing information, tidy displays and clean aisles8.

When it comes to beer, singles pricing can be confusing and inconvenient. When stores limit the number of price tags on shelf to reduce confusion and instead use a “two for” pricing communication structure, singles volume increases 6 percent weekly, on average.  Inside beer caves, organizing merchandise using vertical space with shelves maximizes foot traffic by showing consumers that space is shoppable9. 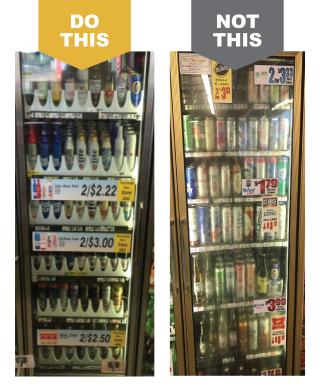 4.  Ensure product offerings reflect the needs of modern shoppers. Shoppers increasingly value flexibility, and they’re shifting to a ‘little and often’ mentality where they’re more-often buying products for immediate or same-day consumption. We know table-stake items, such as tobacco and dispensed beverages, are critical for store frequency. Yet, more retailers are expanding grab-and-go sections as part of their strategy to grow baskets.

These strategies can benefit your stores, help boost your beer sales, and ultimately, grow your business.

About The Building with Beer Blog

Building with Beer is MillerCoors’s approach and selling method to drive category growth across each class of trade.  It comes to life in publications, presentations, and selling aps with our sales teams, distributor network and retailers.  This blog, the newest addition to Building with Beer, is focused on understanding the shopper and retailer insights that drive category growth specifically in C-Stores.  Each month we will share new category insights that will help you grow your business.

The foundation of Building with Beer® starts with the most up-to-date, solid facts and insights. Since 2010, we’ve analyzed 800 million c-store transactions, conducted more than 6,100 shopper exit intercepts, studied more than 2.9 million in-store visitors and 52 million c-store baskets nationwide with VideoMining, and talked with c-store shoppers across the country in focus groups. Through our partnership with NACS, we studied 8,000 shoppers in the Annual Convenience Tracking Program, as well as firms representing 18,517 stores in the State of the Industry report to fuel our thinking.